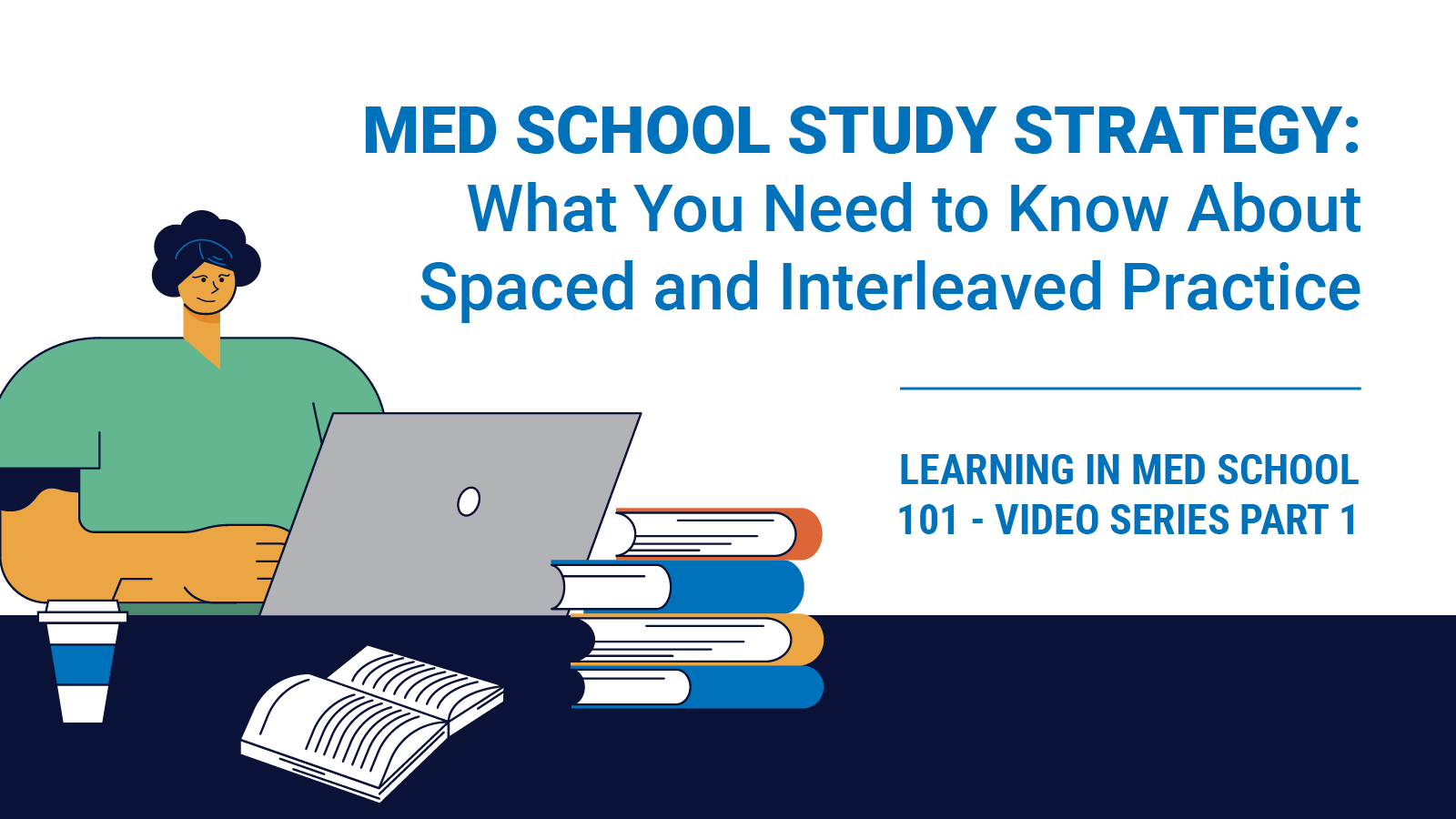 In our newest video series, “Learning in Med School 101,” we break down some key concepts about learning medical school, including skills, strategies, and techniques we share with medical students (and those in related medical fields).

In this video, we dig into two common (although perhaps not commonly named) study strategies and their more effective counterparts. In our experience, two of the most popular ways students study are also often some of the least effective ways to study.

Of these strategies, we’ll start with massed practice. Basically, this is studying one concept and really focusing only on this one topic. Typically, this method features a lot of repetition in an attempt to “burn” the information in your memory. The thing is… this kind of works because it does encode the information quickly. But it doesn’t promote storage consolidation or retrieval of the information, which are the big goals of sustained, long-term study.

The next strategy is blocked practice, or when you master one topic at a time before moving on to the next without revisiting what you learned before. This is also incredibly easy to do but pretty low-yield in the long run.

But, these strategies both have some less common — but effective — counterparts.

Something to remember, though — there’s no way to do this perfectly. And that’s okay! But folding these strategies can help you get more out of the time you’re spending in your study sessions.

Welcome to our Learning in Med School 101 series, where I try to briefly explain a key concept related to learning in medical school. Some of these come from larger talks I’ve already done, some are combinations of old and new stuff, and some are entirely new.

We’re gonna try to briefly introduce and discuss massed and blocked practice and contrast them with spaced and interleaved practice. Here let the term “practice” mean the same thing as studying or learning. This is the heart of learning theory 101. I don’t want you to obsess over this, but I want you to know about it.

So two of the most popular ways students study are also often the least effective ways to study. The first one is called massed practice. With massed practice, when we’re studying a topic, like say a med school lecture or a specific concept, this means we concentrate the learning over fewer, longer sessions over a condensed short period of time. Usually this means we’re using a single-minded, rapid-fire, study by repetition attempt to burn that information into memory. Repeat, repeat, repeat.

Now, here’s the trick. This sort of works. It does encode new information quickly, so we like that. But here’s the bad news. These gains are lost quickly. And this method of massed practice does not promote storage consolidation or retrieval, which are the big goals of sustained long-term study. Cramming is an example of massed practice. It’s an example of pumping the info in right before the test, regurgitating it on the test day, then losing that info. Most of us have been rewarded for exploiting massed practice like this. The arena allowed it, either high school or grad school, or undergrad, wherever.

But when we get to med school or boards, this likely stops working for many of us. And the research is stone cold on this as to why, so we want new learning methods to avoid the inherent perils of massed practice.

Then the other popular but yet less effective method is called blocked practice. This is when you master one topic in isolation before moving on to the next topic, repeatedly hitting that one topic, then moving on to the next and never coming back to the previous topic. So we can say, you might study topic A, hitting A, A, A, A. Then you go on to topic B, hit B, B, B, never going back to A. This is blocked practice. It’s extremely common, super easy to implement but also low yield. It does not promote the main thing we want, long-term learning.

But don’t worry, these two common but less effective practices have effective counterparts. So that’s good news. They’re just a little less intuitive and a little more challenging for the learner to implement.

So here is the biggest thing with all of this though, when we think about the appeal and the superiority of spaced and interleaved practice, it is impossible to use these concepts perfectly in med school and on your board exams. I’ve seen people lose their minds over this. It’s not worth it. It’s not doable. Instead, let’s just try to mix in some spaced and interleaved when we can, and let’s keep it super simple. So here is an illustration of massed and blocked practice with the three concepts designated A, B, and C. It’s massed because each topic is focused on exclusively A, A, A, A, A, burning into memory without taking any breaks. It’s blocked because they only focus on one topic exclusively then move on to the next, never revisiting previous topics.

So our goal should be to do this less. We can turn this into spaced practice by adding breaks between the topic and adding some time between improves encoding, storage, and possibly retrieval. We can turn the spaced practice into interleaved practice by mixing the topics. We can look at this simplistic illustration of what a week of massed and blocked study would look like and see again simplistically and cartoonishly, how we might convert this into spaced and interleaved learning.

Again, you’re never gonna perfectly actualize this. We just wanna be aware that spacing and interleaving is always better. And we want to mix them in when we came without overly agonizing about it. Because there’s just too much information being forced on you in the med school classroom if you’re studying for boards or anything else. I like teaching this concept along with a variety of study tools that can unlock the power of interleaving and spacing, but the key is not making this the end all and be all of your study goals.

This is a great thing to know and understand. And then the goal should be to bring in spacing and interleaving when you can and to avoid blindly structuring your sessions as massed and blocked. But always remember, that learning in med school is imperfect and that’s okay. All right, well, thanks for watching. And look for more of our videos on learning in med school for more insights.