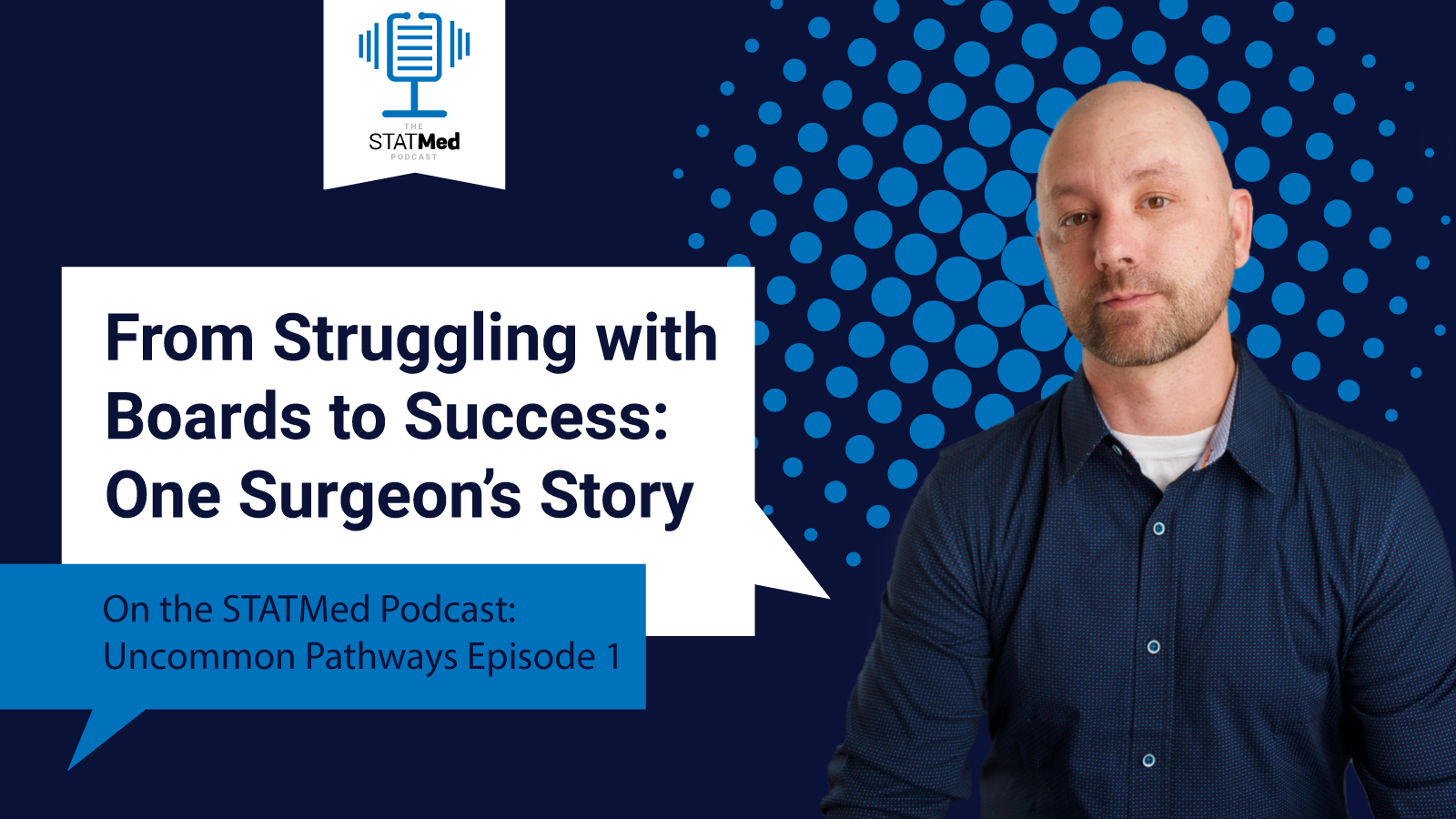 Although the shortest distance between two points is a straight line, that’s not always the path that a career in medicine follows. In our new miniseries, host Ryan Orwig speaks with STATMed alumni who share their uncommon pathways to their dream careers.

The Journey from Struggling with Boards to A Dream Career

In this episode, Ryan and JT, an orthopedic surgeon, discuss challenges he faced in his journey to becoming a surgeon. JT recounts the issues he encountered when struggling with boards. He also digs into the hurdles his relatively low scores caused when trying to get into a super competitive orthopedic surgery residency.

“When I found out what my Step 1 score was, I was freaking out. And so, of course, I would ask people, ‘Is this even worth it? Is this even worth doing? Should I just try something different altogether?’ And you know, almost universally, people told me — and this is what I tell people now — your Step score shouldn’t completely define you or dictate what you do. And so if this is something that you really, really want to do, and you know that beyond a shadow of a doubt, you should just go for it, and you should make every effort to make yourself a good applicant.” – Dr. JT

In future episodes, Ryan and JT will dig into how the STATMed Boards Workshop and Doctor’s Study Skills Course helped change his approach to studying and test-taking.

Are you struggling with boards exams? We can help. Learn more about our Boards Workshop.

[Ryan] It’s really interesting. It’s a, it’s an amazing, just thinking about where, real world stuff intersects with the paper-based applicant. So, yeah. So you, so you did that, you took your step two and then what happened with step two? You crushed that one?

[Ryan] So what were some of the things that were, so for, personally hard for you and because we’re getting close to where you and I sort of connected finally, because you know, at this point I, you know, we’ve never, we’ve never met, we haven’t talked, but you know, cause this is what we’re, where we’re leading with. This is what led you, someone who’s sort of at the tail end of the, the, your orthopedic residency to reach out to somebody like us. Right. Because so far, even though you haven’t scored as well as you would have liked and stuff like that, there’s no true crisis point here.

[Ryan] So what was that? These things that build up year after year throughout this, this five-year this program that led you to sort of, I don’t know, down the particular internet rabbit hole to find us.

[JT] So my fourth year, my fourth year of residency, I really, really studied hard for the in-training exam. I mean, I was consistent with how I was doing, how I was working questions, doing stuff every single day. And I got my score back and it was terrible. Like I was in like the, I don’t know, like the 50th percentile or something. I mean, something just, just crazy. And I was just, I was so mad, because I had put in all this time and it’s like, I know this stuff, like, this is not, this is just not reflective of my effort or my knowledge. And, you know, one of the things that they always tell us, like, you know, if you’re scoring below, if you score below, like, I don’t know, maybe the 25th or 20th percentile as a forth, you know, you’re at a significantly higher risk of passing a board. So it’s like, that just scared me to death. I was like, all right, well, I’ve got, I’ve got to do something. And I just, you know, went down this hole online and just trying to figure out, like, why, like, why am I missing questions that I shouldn’t be missing? Like, cause I look at my questions that I would miss and I’d be like, no, like why did I miss that? I know, I know that, why didn’t I see that in the, in the answer choice, or why didn’t I see that particular thing in the question? And I knew that there was something that I was doing incorrectly, like in my process, like, and I didn’t have the words to articulate that yet, but that’s what I was, I was looking for somebody to speak to that. And I just, I just started Google searching and I came across y’all stuff on YouTube. And I think I found y’all within about a week of y’all launching stuff on YouTube.

[Ryan] We had just, we had just put that stuff out.

[Ryan] You were outraged. [JT] Yeah. Yeah. I was like, what, what is this? And y’all just start talking about this, this stuff that was like, you know, you’re missing, you’re missing these questions. Like, you just you’re, you feel like you’re studying all the time and you’re just not getting anywhere. And I was like, man, like these, like they are speaking my language, like, this is exactly the stuff that I am, that I’m struggling with. So I, I can’t remember. I think I emailed you and was like, hey can I kind of talk with you? And then I ended up having a conversation with you and kind of went through my story and told you what I had been struggling with. And we, we went from there.  [Ryan] Yeah. Cause then we, and then we had about a six month run to get you sort of, to re-engineer what you were doing. So you could actually get the more bang for your buck. So yeah, we talked for a while.  [Announcer] Thanks for tuning into this episode of the STATMed podcast. In the next episode, Ryan and JT will dig into study based issues. If you like the show, be sure to rate it on iTunes, Stitcher, Spotify, or wherever you listen to your podcasts. And be sure to subscribe, so you don’t miss future episodes. You can find more test-taking and studying strategies, specifically designed for med students and physicians, over at our blog on statmedlearning.com. Thanks for listening.